Sodium tripolyphosphate is an indispensable excellent auxiliary in detergents, and the content in most detergents is 10-50%. Its main role can be summarized as follows. 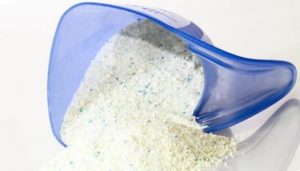 Daily washing water generally contains hard metal ions (mainly Ca2 +, Mg2 +). During the washing process, they will form insoluble metal salts with the active substances in soap or detergent, which not only increases the consumption of detergent, but also makes the washed fabric have an unpleasant dark gray color. Sodium tripolyphosphate has excellent properties of chelating hard metal ions, which can eliminate the adverse effects of these metal ions.

② Improve the role of peptization, emulsification and dispersion:

dirt often contains human secretions (mainly proteins and fats), and also contains sand, dust, etc. from the outside world. The sodium tripolyphosphate has a swelling and solubilizing effect on the protein and has a peptizing effect; it can promote emulsification on fatty substances; it has a dispersion and suspension effect on solid particles.

Sodium tripolyphosphate has a large alkaline buffering effect, which keeps the pH value of the washing solution at about 9.4, which is beneficial to the removal of acidic dirt.

④ The effect of preventing agglomeration:

powdered synthetic detergent is hygroscopic. If stored in a place with high humidity, agglomeration will occur. The agglomerated detergent is extremely inconvenient to use. The hexahydrate formed after sodium tripolyphosphate absorbs water has dry characteristics. When there is a large amount of sodium tripolyphosphate in the detergent formula, it can prevent the caking phenomenon caused by moisture absorption and keep the dry granularity of the synthetic detergent.