Phosphoric acid is used to proudce Lithium-Iron-Phosphate (LiFP) Battery, which is main material as positive anod in storage batteries for electrical vehicles.

Phosphorus in the phosphate radical and four oxygen atoms form a tetrahedral PO4 co-edge with phosphorus as the center. The space skeleton composed of iron FeO6 octahedron and phosphorus PO4 tetrahedron, alternately form a Z-shaped chain The structure, while lithium ions occupy the octahedral position in the co-edge space framework, FeO6 in the lattice is connected by the common angle of the bc plane, LiO6 forms a co-edge long chain along the b-axis direction, a FeO6 eight The icosahedron is co-edged with two LiO6 octahedrons and a PO4 tetrahedron, while the PO4 tetrahedron is co-edged with a FeO6 octahedron and two LiO6 octahedrons. The symmetry classification of crystallography belongs to the Pmnb space group in the orthorhombic system. The unit lattice constant is a = 6.008Å, b = 10.334Å, c = 4.693Å, and the unit lattice volume is 291.4Å3. Since the phosphate groups in the structure have a stable effect on the frame of the entire material, the material itself has good thermal stability and cycle performance.

The high-temperature solid-phase reaction method is the most mature and widely used method for preparing lithium iron phosphate. After the iron source, lithium source and phosphorus source are uniformly mixed and dried according to the stoichiometric ratio. They are first sintered at a lower temperature (300 ~ 350 ° C) for 5 ~ 10h under an inert atmosphere to decompose the raw materials, and then at high 600 ~ 800 ℃) sintering 10 ~ 20h to obtain olivine-type lithium iron phosphate. 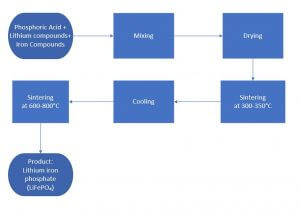